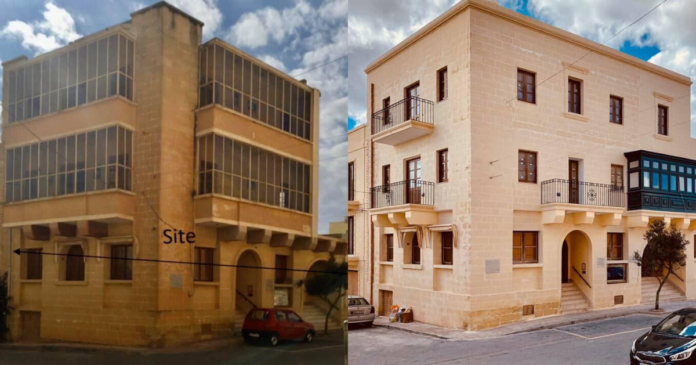 The Nadur Parish Centre in Gozo got a major overhaul, and while we at House.mt are usually the first to praise restorations and renovations, we’re not so sure about this one.

The before-and-after photos of the Nadur Parish Centre, which surfaced on Facebook earlier this week, prompted almost universal praise from most locals, but a number of aesthetes have commented that the renovation was neither necessary nor did it actually improve the area.

“Why does this country have such utter disregard for Modernist architecture? The balconies of the old build were stunning, to put it mildly. When it’s all gone, and when we have nothing left to remember this time in our architectural history, maybe then, (maybe) some of you may start to appreciate it.” Lisa Gwen, local aesthete, writer and curator behind Maltadoors commented on the post.

Her position was soon seconded by Thomas Camilleri, a fellow local aesthete and DIY afficianado. Jude Marie Camenzuli echoed the same sentiment, explaining that – in her opinion – the building just needed a clean up.

“Modernist architecture in Malta (which the Nadur Parish Centre was an example of) is almost completely disregarded, despite the Kamra tal-Periti publishing a book (Modernist Malta, 2009) which focused precisely on some of the most prominent examples on the islands. This is true most especially with regards to residential architecture, which is vanishing at an alarming rate, as it is still not considered as pertaining to our cultural heritage.” Lisa Gwen told House.mt.

To find out more about Lisa Gwen’s views on urban design and restoration, you may want to read up on our interview with her.

“[What happened to] The Nadur Parish Centre is a prime example of the country’s sentiments towards Modernist architecture. The original build had a stunning sweep of balconies – whereby the ‘closed’ stone register vis-à-vis the height of the windowpanes created a most interesting dynamic in terms of line and proportionality. In fact, the bottom floor(s) are and have remained quite nondescript; it is the upper floors which made the old build stand out and which distinguished it as Modernist.” Lisa explained.

“The centre’s transformation is very bland. Despite many ‘liking’ the updated design – calling it Baroque and/or traditional – there is very little of either to mark it as such.”

“A single closed timber balcony does not make this a Baroque or a traditional Maltese build, it simply means that it contains one ‘traditional’ element of Maltese architecture – the balcony. The rest of the apertures, the ironwork, the balance of the elements on the façade and the recessed portions in the stonework, speak another stylistic language. In fact, the original build seems to have been merely ‘undressed’, through the removal of the balconies, which was the only impressive architectural element prevalent on this corner structure. The updated build lacks balance and symmetry, something which the original possessed.”

The Opinion on the House(.mt)

We think Lisa Gwen is right. Where do you stand?