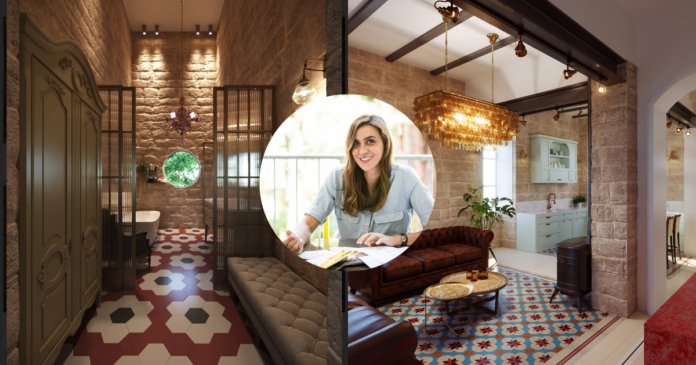 The house in Sliema has been designed by Yael Golan and mixes a vibrant, colourful aesthetic with traditional Maltese elements

Yael wanted visitors to get a taste of traditional Malta, but experience it a new and bright manner. She accomplished this by using unconventional colors and materials for the furniture, and by blending different styles that worked well with the baseline of Maltese tradition.

For example, Yael opted for classic Maltese tile design, but complemented it with a unique and completely non-traditional colour palette. The same goes for the KARE pink cabinet in the entrance, as well as the colours selected for the kitchen cabinets. To Yael, the goal was to make people who stepped inside to ‘beam’ with inspiration. With this in mind, she also introduced new arches to complement the arch that was already there in the main hall, feeling that the arch was too quintessentially Maltese to not invest in.

As the WC was practically in the backyard, Yael capitalised on this by giving the WC a feel that made you think you are, actually, outside. As this section of the house is intended for BNB travellers, Yael opted for bold choices: A fig leaf wallpaper and Victorian green fishbone tiles.

Each bedroom, no matter what size, was fitted with a fully functional bathroom and shower, a coffee station and a lounge area, allowing guests to live in their own ecosystem within the house. Names were given for each bedroom for easy identification.

Looking for something romantic and warm, Yael used a crown shaped iron curtain frame above the bed, and complemented it with a curtain that the guests could drape around the bed for added intimacy. Since the rooms are not big, introducing the toilettes and retaining a feeling of a comfortable space for the guest was essential. This is why we used light iron partitions that were subtle and not competing with the design of other elements in the room.

Size was an even bigger challenge in this room, so Yael focused her energy on transforming the adjacent smaller room to a lounge and bathroom. Her aim was to emulate a prestigious feeling while staying in this room where guests have a quaint lounge area sitting in front of a beautiful handmade baroque inspired dresser and classic art hanging behind them as they lounge comfortably on a capitonage bench.

Yael is from Jerusalem, Israel, and she has big plans for Malta

Yael has been in Malta a total of 7 times, staying over a few days every time. Yael immediately fell in love with the island’s architecture, and thanks to a few local friends who showed her around, got to visit some of Malta’s best architectural gems.

Now that she’s familiar with local contractors, carpenters and suppliers, Yael is ready to do more business in Malta as an interior designer and restorer.

Magdalena Ewa Podhorski-Okolow and Yael Gohan met in Ibiza, Spain around 25 years ago. The two worked there together for a time, but then went separate ways. Having stayed connected through Facebook, Magdalena contacted Yael again when she moved to Malta, and invited Yael to see the island. Yael, seeing that it’s just a 2.5 hour flight, said yes.

Magdalena, the owner of the house in Sliema, had been wishing to acquire this townhouse for years

Magdalena knew she wanted to buy this house in Sliema the moment she stepped inside. Over the years Magdalena, who lived in the same street, would regularly check the house out, pass by, and in her own words ‘feel envious for whoever the owner was’. When the house came up for sale, Magdalena seized the opportunity. She vividly recalls strolling through the house for the very first time with the agent:

“I was struck by the layout, brightness, the history I imagined it is steeped in and the story behind it. I was already making it mine in my head, visions of how I would convert it and how I would share its glory with the world.”

Shortly after the eventual acquisition, Magdalena reconnected with her old friend Yael and decided to pay her a little visit in her home in Tel Aviv. Thanks to social media, Magdalena got to keep an eye on Yael’s growing body of work in interior design. Having already had other properties under her belt, Magdalena never actively considered working with an interior designer.

One evening in Tel Aviv on a roof top terrace chilling by a pool, while Magdalena was busy describing the house and her vision for its use, Yael kindly offered help as a friend to share some pointers and set Magdalena in the right direction.

After the first call, it became evident to Magdelana that if she really wanted to execute her vision for the house in Sliema, then she would need more than just a ‘phone call and some tips’. Soon after, the two started working together to begin restoring the house.

Yael started to travel to Malta every month in order to keep the project moving. Magdalena and Yael would talk, hang out, go to shops, look at magazines, recall childhood and past travels and, over time, began to design the house. In Magdalena’s words, Yael’s expertise created a result that became a reflection of her personality, experiences, and love for Maltese classic design.

In Magdalena’s own words, hiring an interior design is absolutely ‘pivotal’ to creating the home you wish for

For Magdalena, the entire experience has changed her outlook on a lot of things. For starters, she now believes that interior designers should be a mandatory step in the setting up of a home, as mandatory as having an architect.

“There is a common misconception that if you use an interior designer it means you do not have your own style and knack for design, and that could not be further from the truth. This process has taught me that, with an interior designer, you can actually realise your vision in the most effective way possible. You’re not just getting an expert, you’re getting someone who’ll help you make decisions confidently, who’ll show you how to bring out your tastes and sense of style, and who’ll help you minimise your costs while achieving seamless results.”

Magdalena described the design process, working together with Yael as a friend and colleagues as an absolute joyful experience that culminated in an incredible outcome, and taught her a lot on design.

Magdalena is turning her Sliema house into an AirBnb so that she can meet people, exhange experiences, and share her tiny slice of Malta

To Magdalena, this house is an opportunity to share all the great things about this wonderful island from her perspective as a foreigner, a foreigner who has gotten the chance to integrate deeply with the social fabric of Malta. Magdalena’s idea is to welcome people into her home, her life and exchange views, ideas and experiences. “Humans are social beings, and thrive best when they have continuous contact with people from different backgrounds.”

“Ideas and beliefs only grow stronger when shared with others.” Magdalena continues, “and this way, travelers who come to Malta get a real slice of the island at its most beautiful.”

Is there a house that you think deserves our spotlight?

Send us a private message or leave a comment, we’ll give it a look!