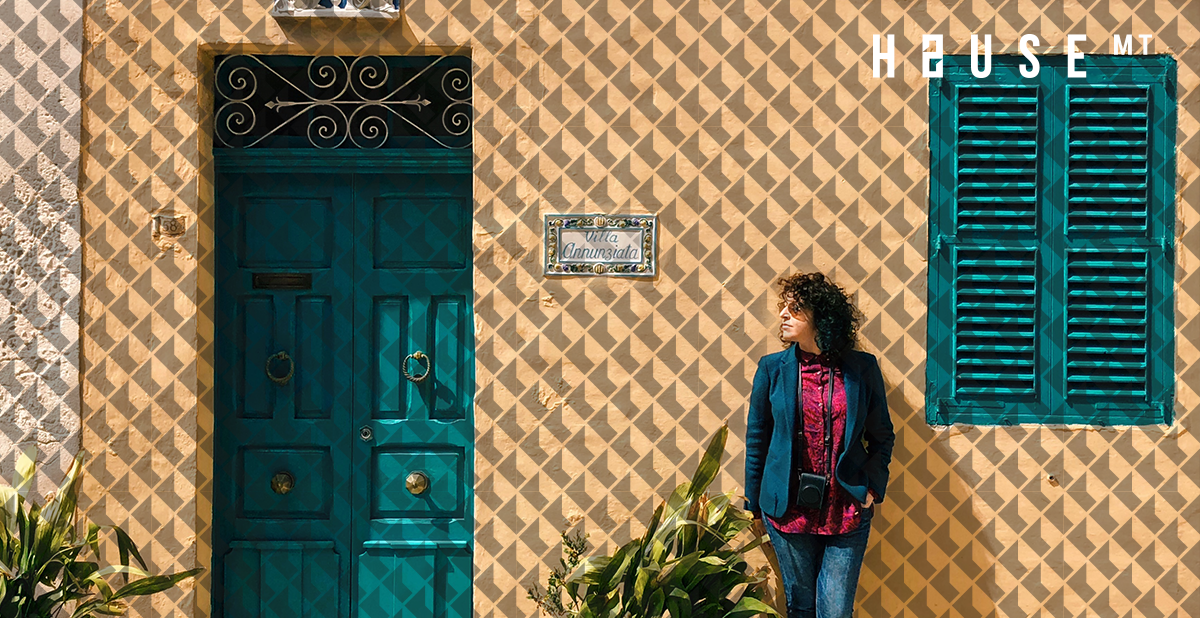 Here’s some advice: If you’re doing up your home’s porch or fixing up an old townhouse, and you want an exterior, from the door to the ironwork to the knockers, that arrests attention and is chiefly Maltese in character, then there is a page you should look at for inspiration, and a person you should meet.

If you look up MaltaDoors, you will find a collection of photographs, each capturing a slice of what makes Malta a jewel in the Mediterranean, charming people from every corner of the globe to visit us time and time again: our colourful, sometimes minimal, other times ostentatious and intricate, but always quirky, facades.

When her time is not taken by her role as the Head of Creative Europe Desk, where she works to support local artists and cultural initiatives, you will find Lisa Gwen strolling through Malta’s streets, hunting doors that catch her eye with her camera.

We’ve decided to find out more about the woman behind MaltaDoors, Lisa Gwen over coffee, below are snippets from the conversation.

H: Most of the doors you feature belong to older houses – what’s your take on the more contemporary exteriors?

Once I actually got sent a message about this, the person asked why I do not feature contemporary doors. I actually have a handful of pictures that belong to contemporary houses. At the end of the day, what I look for, whether it is old or new, dilapidated or squeaky clean, is still an aesthetic. And yes, it is about doors, but it’s not just about the door. It’s about the front porch, it’s about that flight of stairs, the windows, the creeper, the light. It’s also how it complements the street it is in – what is it offering to people passing by?

H: Do you feel that these are questions that newer apartments and buildings ask?

I think that, sadly, a lot of the new buildings do not keep this in mind. There are some exceptions. A place that’s right next to my mother’s house was converted a few years ago, and it has become a favourite of mine. The architecture firm that worked on it – A Collective – was so sensitive to the place and to the original build, I was genuinely impressed. I remembered the house before they converted it, so I saw it come to life.

H: I find it really interesting when you show the modernist facades – it really shows how Maltese design can transcend a traditional aesthetic.

Unfortunately, I feel like we’re really losing that. The modernist and post-war and mid-century architecture in Malta is disappearing at an alarmingly fast rate. If I had to buy a place, I am sure I’d want to find a place that’s from the 60s or 70s.

H: So, is it a definite no to new apartments?

It’s not that I have anything against apartments. I have visited Thomas Camilleri’s house, which is an apartment, and I enjoy that it boasts a gorgeous light, a flow of space – even the corridors aren’t just long dark neverending halls but distinct spaces themselves. When I see an apartment like that, I say, yes, I could live there. The problem – I believe – is that many of the apartments in Malta have been left in such a poor state for so long that it’s hard to see what they can be turned into. For most, the first option is to demolish and rebuild. It takes an artistic eye, a technical background, and patience from the investor’s part, for a place to be authentically transformed.

H: What’s one piece of advice you would give to homeowners?

Listen to and look for local designers and artists. A lot of homeowners don’t tend to engage or commission people who can do this kind of job. For a long time, Maltese artists, carpenters, and artisans were not seen as valuable to homeowners, who would instead opt for everything ready-made. Now, there’s a gradual shift in people paying a little more attention to what Maltese talents bring to the table.

H: Back to MaltaDoors: How does its future look like?

I’d love the opportunity to take photos of doors abroad. My interest is not only in Maltese doors, contrary to what many may think by now. I’d love to start properly documenting facades and streetscapes during my travels. Every context – every locality – has its own stories. Last year I was in Naples, there, rather than the doors per se, I was absolutely smitten with the votive kiosks, which look a little like the traditional devotional niches dotted around the islands. They construct them on the exterior of their facades, and combine the sacred and the profane in one structure.

H: Do you get a lot of people messaging you on Instagram?

Yes! The amount of messages I get from people thinking I am part of the tourism bureau and asking for touristic information is hilarious. I must admit, sometimes it gets a little tedious when people ask me for the street name and door number. You have the locality written down, so go and look for them yourself. Discover it, take a walk. You might find something that I haven’t!

H: The argument put forward, most often, is that the traditional has no place in new design – what are your thoughts?

I am not going to propose rebuilding houses with niches or other typical architectural features, but there can be alternatives. Why does that giant window always have to be a rectangle when we can borrow inspiration from the many styles of arches and pointed windows we’ve inherited? Before, we used to have oculi on facades and roundels and ovals. At some point that ceased to be incorporated into ‘design’.

H: What’s one thing you learned from photographing traditional architecture in Malta?

Sometimes, when I am out and about taking photos, I find myself in a particular strip of a road where 7 – 8 houses all have the same ironwork design in the lodge, matching balconies in different colours, or other shared features. That showed me that they had been designed together.

H: True, it’s certainly not uncommon to see this in older areas around Malta

In a lecture given by Edward Said at the University, I learned that at one point there was this effort for facades in different streets to look like one big palace but which were, at the same time, divided into different units. It showed a certain cohesion, collaboration, and unity between the homeowners. And more importantly, it allowed for symmetry and a high degree of aesthetic. This is the kind of aesthetic that created the idyllic streetscapes we get to photograph and enjoy today.

This is what I really want to see here. At least when it comes to highly visible places such as the seafront and promenades. Beautiful towns like Burano or Cinque Terre did not come about and are not maintained by accident.

H: Do you think this is important for people in Malta to consider?

Absolutely. Our streets are our most easily accessible public spaces. People do look at houses, people like photographing streetscapes, and people like the idea of wandering around in a beautiful town, it is part of their touristic and cultural experience. Over the last years, Malta has grown into a gaming hub, and now hosts more modern buildings and hotels than ever before, but when you look at the adverts, the postcards, and the promotions we use to attract tourists to our isles, it’s the old traditional Maltese balconies, the luzzu with the eyes on the bow, the streetscapes of our village cores, and our quirky, colourful doors that take centre stage.

Stay tuned for the second part of our chat with Lisa Gwen, coming out this Friday!

Find out about the stranger things she encountered in Malta while door hunting, her background, and more!