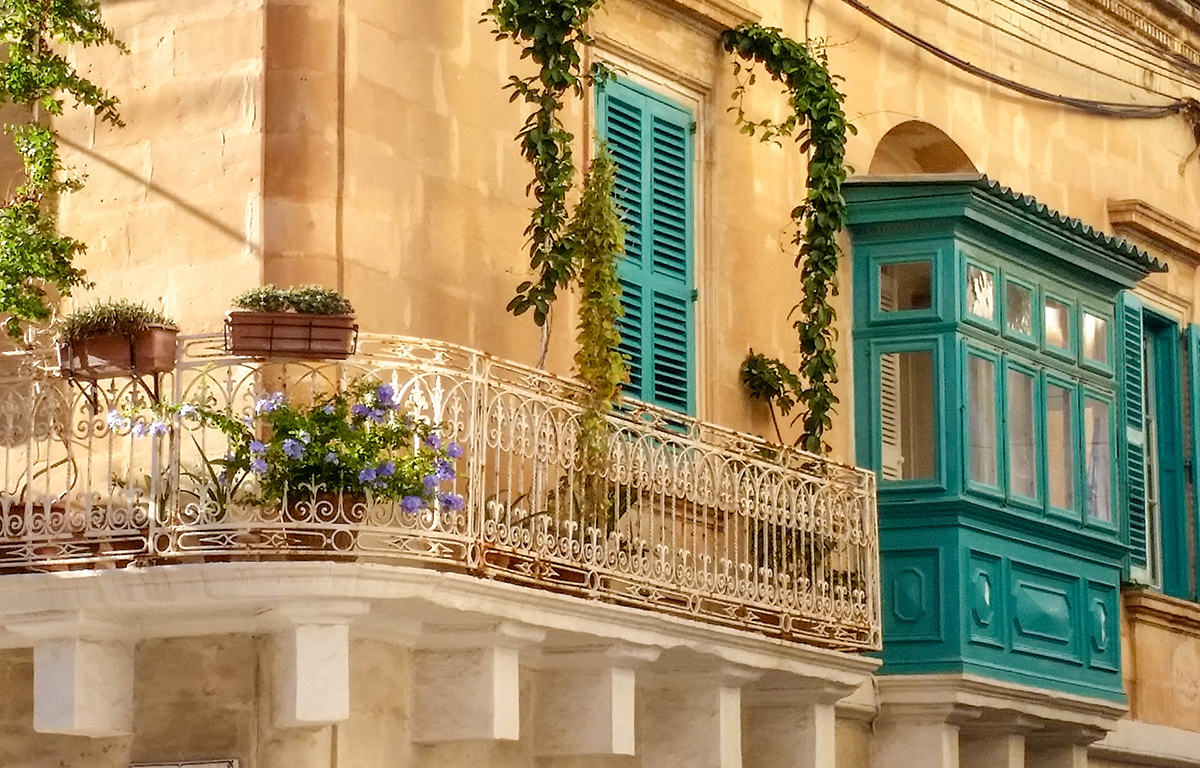 Be it by locals or visitors, our traditional balconies, and the myriad of colours and styles they come in, frequently find themselves the centrepiece of photos uploaded on Instagram and other social media channels. Malta’s distinct ‘enclosed wooden boxes’ sitting on the facade of many older houses (and in some cases, newer buildings who borrow a note or two from our history) have become a distinct icon of Malta’s identity.
It makes sense, along with the doors, windows, and panelling, our balconies inject colour into our limestone shaped towns, articulating our sepia-toned streetscapes with their unique composition and intricate accents. Like the Maltese cross on our flag, the ‘luzzu’ with the eye on the bow, and our now lost old, traditional buses, balconies are a staple of Malta’s identity.
But, ask a local about the story of our famously colourful balconies, and chances are the answers you receive will be a little vague, contradictory, or downright fantastical.
In light of this, we’ve decided to do some digging and find out some established truths about our traditional Maltese balconies, here we go:

Built in 1679, the corner balcony of the Grand Master’s Palace in Valletta is believed to have been the first to become enclosed with a wood and glass structure. This fashion spread to the villages during the 18th century. During the 17th century, Knight’s Order issued a decree stating that all the houses in Valletta had to have some sort of design element to it.
People decorated their facades in three distinct ways, by adding religious images, through pilaster and cornices that matched the architectural style of the elevations, or balconies that wrapped themselves around the block.

3. Of the three above, the balconies were the last to be incorporated

Due to the lack of ties to global trade, and its position in the middle of the Mediterranean, timber was hard to come by before the 19th century in Malta. This delayed the adoption of the Maltese balcony to other villages.

The knights stayed in Malta for 268 years, and during this time, they ‘imported’ many North African and Turkish slaves who were experts at building these type of balconies and were then incorporated within the streets of Valletta, but didn’t really become popular until the 19th century. Consensus is that the Balcony’s origins can be traced back to North African – specifically Moroccan – prototypes derived from the Arabic Muxrabija (look-out place).
The Muxrabija was a wooden frame which entirely screened the window save for small holes or apertures through which the person on the inside could observe the street outside while remaining hidden.  At this period in time, women in the Arab world were not allowed to socialize with the world outside – the Muxrabija was their way to look at the outside world without being seen. They were also used as a cooling device for water storage and as a security measure to see who was at the door or on the approaching roads.

6. Malta did not hide its women, but…

The Balcony, unlike the Muxrabija, offers a much easier view of the outside, but its function was not entirely different. Maltese housewives rarely went out unless accompanied by their husband, and the balcony was their way of observing the world while retaining their privacy.

7. But this adjustment makes our Balcony chiefly Maltese…

Many balconies in Malta are decorated with faces that show their tongues (tongue-masks).  This custom originated in Egypt, where they portrayed the god ‘Bes’ on their facades to ward off an ‘evil eye’. However, Egyptians tended to show more intimate parts of the god. This was a complete no-no in Catholic Malta, so we decided to go for the tongue instead.

Do you know an interesting fact about the traditional Maltese balcony that you’d like to share? Tell us in the comments below, we’ll be publishing part two very soon.