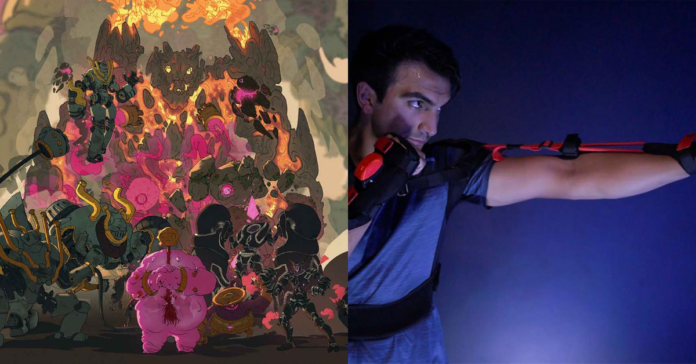 Concerned about your kids spending too much time playing video games? Quell, an innovative video game that combines top-notch gameplay with high-intensity, resistance-based combat workout at home, may be your best solution.

The game includes a slip on Gauntlet which players will use to punch their way through the game’s fantastical opponents. Thanks to its sports-grade resistance bands, customisable resistance and high-performance motion tracking, each (in-game) challenge guides you through an effective workout tailored to your fitness goals.

Even small obstacles are killers when it comes to maintaining a solid workout routine, whether that’s bad weather, travel time, sharing equipment, workout plans, or in 2020’s case, a pandemic. Quell was designed to eliminate these barriers while providing an activity that offers both a fun experience and an opportunity for parents and kids to collaborate (or compete) together.

Here’s some key selling points that are fueling anticipating for this game:

Designed to remove all the barriers to regular exercise, Quell is dedicated to providing a fun work-out experience that won’t be hindered by bad weather, travel time or equipment.

The home fitness and video gaming industries have both seen a surge in interest through the coronvirus pandemic, driven by a desire from homeowners to find ways to introduce physical activity in the household. Interest has been especially high amongst parents concerned by the amount of hours their kids spend in sedentary positions while playing video games. The game also provides an opportunity for kids, young adults and parents to interact, play and exercise at the same time. As established by other recent innovators in the field such as Jabii and Zwift. Quell is expected to start rolling out in Q4 of 2021.

Not convinced by Quell? Check out JABII and ZWIFT

Jabii pits kids against each other in a hybrid of virtual and real world combat, using padded extendable gloves connected via Bluetooth to an app that tracks hits and scores. The “controller” takes the form of a spring loaded glove, which looks like something from the Wile E. Embedded inside the rubber head of the glove is a nine-axis accelerometer, designed to capture data on the punches thrown, how fast they were going, the hit rate on the opponent and where players are standing. All that information is sent via Bluetooth to the connected Jabii app, where it’s crunched to determine the winner. Cheering and verbal instructions will also be played through the user’s phone or tablet. Even with ample precautions, it may be a wise decision to keep your kids away from breakables while playing this game.

If riding, running and racing is more your style, Zwift is a massively multiplayer online cycling and running physical training program that enables users to interact, train and compete in a virtual world. Zwift allows players to ride their bicycles on stationary trainers while navigating through virtual maps, with some maps based on real-world locations and circuits while others a lot more fantastical.

Players may cycle freely around the game world and join organized group rides, races, or workouts with other users. Zwift uses ANT+ or Bluetooth Low Energy technologies to transmit data that, in combination with athlete weight and equipment choices, is used to convert the athlete’s efforts as speed and power (watts). “Smart” trainers, which include a built-in power meter, permit accuracy in the measurement of watts as well as enabling an immersive technology experience, where resistance is applied or lessened to simulate the gradient encountered on the virtual course. Zwift estimates the power of users on conventional trainers via the user’s cadence and the power curve of a wide range of specified trainers.

In 2019, Zwift appointed Craig Edmondson as CEO at Zwift Esports, and has produced two e-race series events, participants were professional athletes compete on the platform.

In 2020 due to the Tour de France being postponed because of COVID-19 pandemic Zwift was used to host a virtual Tour. Laura Siddal, a pro triathlete, along with other world champions, use Zwift. Check out her thoughts here.

The best smart home devices for 2021