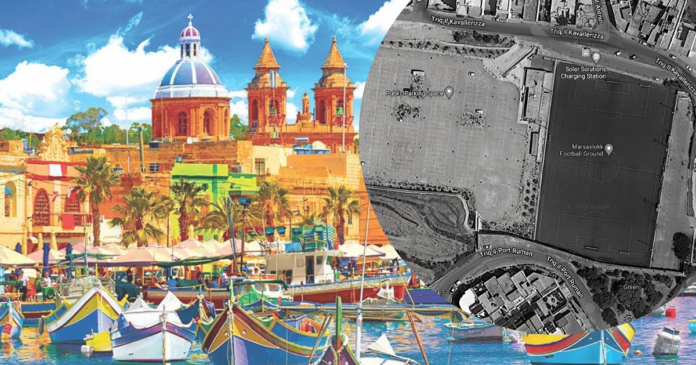 The application proposes a 22,500 square metre project for a new football pitch, a three-storey hostel, a three-storey home for the elderly, a social club, sports shop, pharmacy, physiotherapy clinics and underground parking.

Marsaxlokk residents voiced their frustration and anger at this new project online, with many commenting that this proposal does ‘not regenerate Marsaxlokk’, but is there ‘to make private profits’. Commentators also voiced suspicions over the Hostel, which many noted has dimensions ‘comparable to that of a hotel’ and lamented the potential loss of more public spaces to commercial interests in Marsaxlokk should this project go through.

Dr Edric Micallef, the previous mayor of Marsaxlokk, was the first to object in a formal objection he sent to the Planning Authority and uploaded on Facebook.

Vice mayor Elenia Desira and councillor Daniel Żerafa both objected to this development.

The proposal would replace a public car park developed by Project Malta adjacent to the 11 a-side football ground. This public car park was built under the direction of ex-Minister of Tourism Konrad Mizzi as part of the proposed masterplan for Marsaxlokk’s regeneration.

Despite protests by the Environmental and Resources Authority, who actually intended to schedule the agricultural land for protection as an Area of Ecological Importance, the public car park project was approved by the Planning Authority back in 2016. The government had insisted it was the most suitable location because a large part of the site was already disturbed.

In a letter objecting to the new development proposed to replace the public car park, a resident from Marsaxlokk explained how, according to Konrad Mizzi, the tourism minister at the time, this car park was built as an environmental project, includes rural landscaping, and aims to ease traffic problems in Marsaxlokk and provide a place for hawkers to park their vans relieving the promenade from obstruction by large vehicles. The car park also includes a water reservoir, which can hold around 760 cubic meters of rainwater, and paving [was] made using material through which grass can grow. In fact, the car park was given an award for being ‘environmentally sustainable’ in December 2018 by the Malta Architect Awards, hosted by the Planning Authority.

The resident has made this letter available as a PDF for anyone who would like to attach it to the objection.

The Planning Authority has made available an online form for people who would like to support or object to this development.

If you’d like to voice your support for or object to this project, you can go to the Planning Authority’s website, scroll down until you see ‘submit representation’, and then fill in the form.