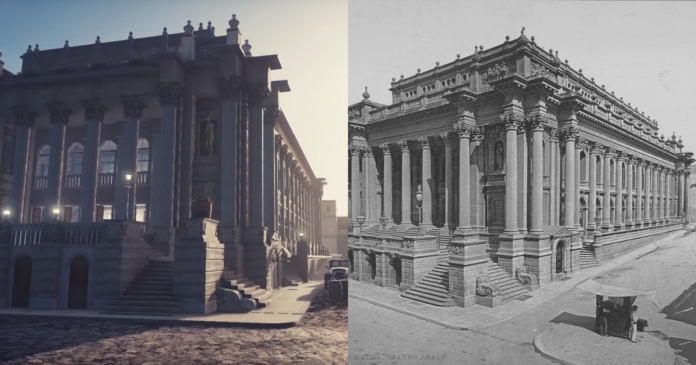 Matt Pace, a local creative with a proclivity for world-building, used a videogame editor to recreate Malta’s old Valletta. His creation includes a complete (approximate) replica of the Royal Opera House’s exteriors & interiors, as well as the Valletta Railway station and Porto Reale.

A personal observation: As someone who admits to having spent countless hours playing with world editors in games such as Simcity, Cities: Skylines, and Stronghold, I’m thoroughly impressed by the level of detail Matt went into. Of course, the Far Cry 5 Arcade editor provides a lot of resources, but the sheer amount of work this must have taken is jaw-droppingly marvelous. Kudos, Matt!

About the project, from Matt:

“I remember seeing the ruins of the Royal Opera House every time I walked into Valletta with my grandparents, and wondering what this building must have looked like when it still stood at the entrance of the city. Inaugurated in 1866 during the British colonial period, the opera house was gutted in a fire in 1873, renovated and finally re-inaugurated in 1877. Also known as the Theatre Royal (Maltese: Teatru Rjal), the opera house entertained audiences for the next 65 years before being badly damaged during air-raids in 1942, and being subsequently demolished in the 1950s.”

“While it stood, the Royal Opera House was a staple subject of postcards and holiday photographs, and the exterior is well-documented. On the other hand, images of the interior are a lot harder to find! I wanted to recreate the experience of visiting the opera house sometime between 1925 and 1935 using the Far Cry 5 Arcade editor and whatever photos and floor plans I could find.”

“I’m no 3D digital modeller, so the Far Cry 5 Arcade editor gave me the opportunity to recreate this iconic building with access to some 10,000 objects from six different Ubisoft games and the ability to easily manipulate environment and atmospheric settings. The downside is that I was limited to the objects and textures available within the editor. For example, I was able to cobble together traditional Maltese balconies using a combination of shed doors and window shutters, but most buildings lack a texture comparable to Maltese Globigerina limestone. This build definitely pushed the Far Cry 5 map editor to its limits. Not only was I close to the 15,000 object limit, but the lighting system was beginning to struggle with the density of light sources I was packing into a small space.”

“This project was a lot of fun to put together, leading me to discover other lost architectural gems in Valletta, including Porto Reale and the Valletta Railway Station. I hope you enjoy the tour!”

And what about the *real* Royal Opera House?

Designed by English architect Edward Middleton Barry and erected in 1866, the Valletta Royal Opera House was hailed as one of the most beautiful and iconic buildings in Valletta.

In 1873 the Opera House’s interior was extensively damaged by fire but was eventually restored by 1877. Almost 70 years later, a direct hit from aerial bombing in 1942 during World War II left the architectural jewel in ruins.

After several abandoned plans to rebuild the theatre over the next decades, the ruins were redesigned by the Italian architect Renzo Piano and in 2013 it once again started functioning as an open-air performance venue, called Pjazza Teatru Rjal. The development of the theatre by Piano is the most controversial in its time. Despite completion of this redesign, calls to properly restore the theatre to its original state have continued. In fact, just last November – over 9 years since its refurbishment – the Democratic party called for the building ‘to be rebuilt to its former glory’.

During the Budget 2020 speech, the government said that it was open to proposals about how to roof over the theatre and would be holding a public consultation on the matter.

Do you think the Royal Opera House should be restored fully?