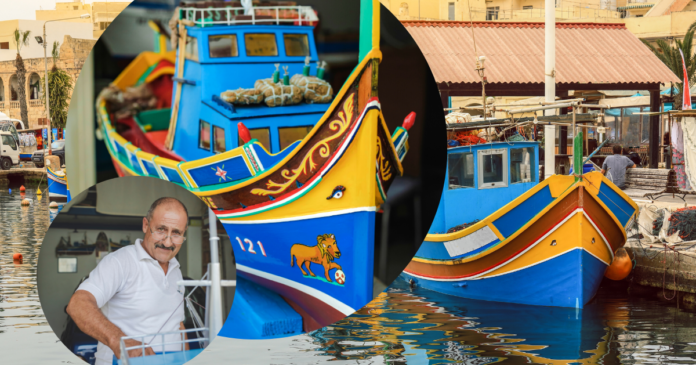 Twanny is an ex-fisherman from Marsaxlokk who builds miniature models of Maltese fishing boats; his collection includes replicas of modern fishing vessels as well as the traditional Maltese ‘luzzu’ and ‘kajjik’, complete with the bright colours and eyes on the bow.

Also known as ‘taċ-Ċajna’ by fellow locals in Marsaxlokk, Twanny regularly takes on requests and commissions. His clients, he tells us, are varied, from local homeowners who want to add a touch of Maltese character and flair into their homes, units and living rooms; owners of commercial stores and restaurants who would like to define and differentiate their spaces; to fishermen who are now retired, but want their homes to possess a connection to the sea and their trade.

Twanny learned the craft from his father and grandfather back in his youth; during this time, he explains to us, he would often prefer going on fishing trips with his grandfather than attending school (despite his father’s protests). While he learned the craft of manipulating timber and building models at a very young age, he abandoned this hobby once he started working full-time to support his family. Between working in the oil rigs in Libya, and then returning to Malta to work as a full-time fisherman, Twanny had little time for building models and miniatures – a practice he considered as playtime.

Twanny only returned to the craft after he retired as a fisherman just a few years ago. With newly-found time on his hands, and a desire to maintain some connection to his seafaring past, Twanny started building miniature models of fishing boats. His first creation, an original modern fishing boat, quickly attracted the attention of friends and fellow fishermen, and soon after, commissions for replicas and originals poured in. With timber he acquired from friends and neighbours, inventive use of rope, paper and plastic, and a host of ornaments form lego and playmobil collections belonging to his grandsons, Twanny’s model making took off.

Here’s our favourite facts about the ‘Luzzu’, Malta’s

Would you like a miniature of a traditional fishing boat inside your home, office or commercial space?

If you speak Maltese, Twanny welcomes calls to his phone number at 99887431. If you prefer to speak in English, it’s easier to send a message to his Facebook page to get in touch with his family, who manage the page.

Want to show Twanny your support?