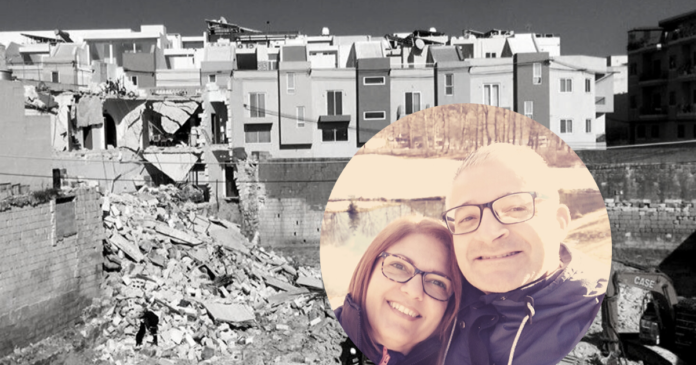 Mother of two, Miriam Pace passed away yesterday after her home collapsed at around 2:30pm.

The search and rescue operation managed to locate and then extract her body at around 10:30pm.

Rescuers explained that, due to the instability of the rubble, they had to proceed slowly and carefully. The police spokesperson, Brandon Pisani, confirmed that Miriam Pace’s body was found on the left side of the building close to where the sidewall collapsed.

Miriam Pace’s funeral will take place this coming Thursday in Valletta, at 2pm. Whilst the Pace family lived in Hamrun, they formed a strong part of the Valletta community, as both Carmel and Miriam were very active in the Madonna tal-Karmnu feast.

People close to Miriam describe her as a kind, loving woman who volunteered with the Cana Movement.

Miriam and Carmel Pace, together with their son, lived in a maisonette above a car showroom. The couple also has a daughter.

Donations are being collected to support Pace’s family.

As endorsed by Family Pace, St. Venera, ĊAMYouths is collecting donations on the family’s behalf.

The daughter of Carmel and Miriam Pace, and her husband are members of the ĊAMYouths organisation. The family would like to thank everyone for their support.

Donations can also be sent by SMS to the following numbers;

The Times of Malta has reported that four are facing potential charges, namely negligently causing the death of Pace, who is a wife and a mother of two.

It has been revealed that Roderick Camilleri is also a shareholder in the company profiting from this project. The site is owned by the development consortium, MCZMC Developers Limited.

Robert is one of seven shareholders, with a 10% stake to his name at MCZMC Developers Ltd run by Malcolm Mallia. Mallia is a council member of the Malta Developers Association.

Camilleri drew up the method statement for the excavation works and would have had to evaluate the risks involved under new rules approved last year, following a series of building collapses. Many have raised questions about conflict of interest – asking whether Robert had a motive to downplay risks involved since he was going to later profit from the development.

The Malta Developers Association reacted by suspending council member Malcolm Mallia, who is part of a development consortium that invested in the project in question.

The reform in construction practices enacted last year is an “absolute failure”, Graffitti said in the wake of the collapse yesterday.

The reforms in demolition and excavation practices were introduced last year after three incidents that involved collapsed buildings adjacent to construction sites.

Earlier in the day, Moviment Graffitti also reported that the Planning Commission has just given the green light to Fortina’s private catamaran service in Balluta Bay, overturning its own indication a month ago to refuse this application.

In a statement on Facebook, Graffitti explained how “during a surreal sitting this morning, the three members of the Planning Commission actively defended the Fortina application as if it were their own. Questions from the public on why they were so blatantly ignoring policies that expressly prohibit ferry landing places in bathing areas were met with silence from the PA Commission members.”

Graffitti were joined by other civil society groups, including Flimkien għal Ambjent Aħjar, who likewise denounced the rules as cosmetic and doing nothing to curb the industry’s rush to build.

“We’ll not be silent in the face of all this. Therefore, in Miriam’s name, in Maggie Smith’s name, in the name of the families who lost their homes last year, in the name of all the workers who died in total indifference on construction sites that on Saturday morning we’ll protest, once again, against the greedy rule of the developers.” Graffitti wrote in a post announcing the protest.