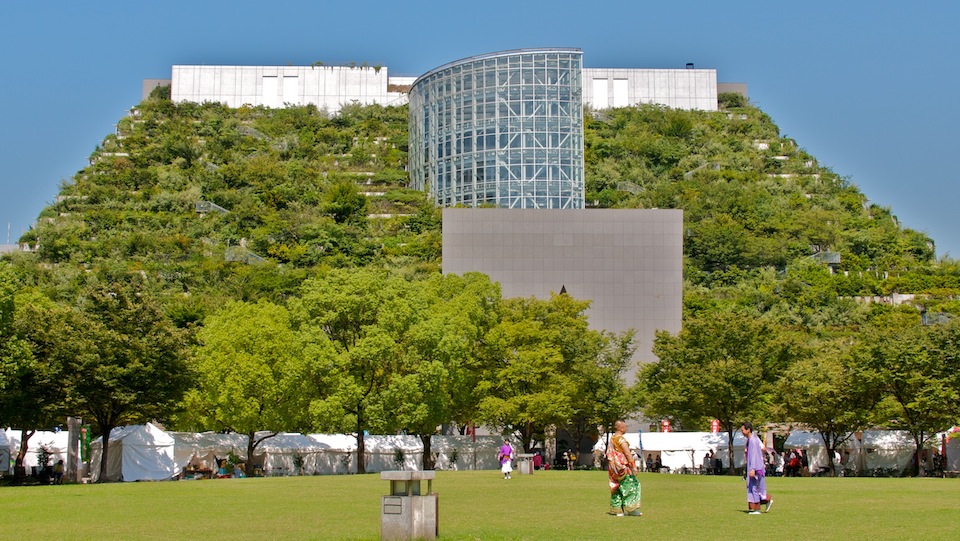 [av_textblock size=” font_color=” color=” av-medium-font-size=” av-small-font-size=” av-mini-font-size=” av_uid=’av-ju9hh9wj’ custom_class=” admin_preview_bg=”]
For this week’s article, we’re listing 10 great green high-rises in the world that are putting their best foot forward when it comes to sustainability. Abroad, developers and architects exploring greener, healthier approaches to construction with fascinating results and achievements that can inspire present and future developers Malta to look at the bigger, greener picture.

Hold on a moment!

We’re not advocating that Malta should start popping up high-rises. A high-rise comes with enormous demands on a city’s infrastructure, and if not planned properly, can be a massive burden on quality of life, transport, resources, sewege and water systems. In this list, we’re showcasing buildings that are exemplary of thorough planning, research, and progress.
[/av_textblock]

This building is the headquarters of the Co-Operative Group and houses around 3,000 employees. According to CNBC, this building is said to be ‘powered by a pure plant oil fed Combined Heat and Power (CHP) system and utilizes rapeseed oil which is grown on The Co-operative’s own farm land.’ Moreover, the company trades in excess energy, and instead utilise a system to recycle waste and rain water. The company has also implemented LED lighting in the building, a more energy-efficient solution than traditional bulbs. All in a day’s work, right?

This building ticks all the sustainable boxes in BREEAM’s (Building Research Establishment Environmental Assessment Method) standards, having been rated as ‘Outstanding’.’ – undoubtedly the highest rating. BREEAM assesses and rates the sustainability of different buildings, and it includes several sustainability categories for assessment, including, amongst other factors,  the extent of waste and materials used to construct a building amongst.t other.

That’s the curvy one spiralling up, and it’s designed by international design firm Gensler.

The Shanghai tower is the second tallest building in the world (only surpassed by Dubai’s Burj Khalifa) and is continuously adopting new technologies to increase its sustainability. Wind turbines surround the building and some can be found atop its roof. Transparent inner and outer ‘skins’ allow less use of artificial lighting by allowing more natural light to flood in the building. The Shanghai tower’s use of smart technology also exemplifies how cost-efficient automation can be. By implementing smart controls around the building’s infrastructure which monitor everything from ventilation to heating, it helps cut down money spent on energy bills.

One Bryant Park’s Bank of America Tower is the king of the hill when it comes to ecological friendliness. Certified by LEED Platinum as being one of the world’s greenest skyscrapers. This building utilises waterless urinals as well as LED lights instead of regular bulbs. Not only that, this building also has its own generation plant that produces ‘4.6 megawatts of clean, sustainable energy’, according to CNBC.

The most striking feature this landmark has is the sloping exterior walls with sharp and extenuating corners. It’s not just aesthetically styling, these geometrically sloping walls allow more sunlight to enter the building, minimising dependence on electricity for light.

For all you concrete thinkers out there, here are some great statistics regarding the materials used for this eco-friendly high-rise. A remarkable 40% of the materials used to construct the building were locally bought, reducing the amount of energy used in their transportation, while also supporting regional economies. Developers also decided to use fly-ash, thereby saving around 45% of the cement that would have been used in concrete. In doing so, they’ve reduced waste and eliminated a significant amount of pollution which is usually caused by the manufacturing of concrete. If that isn’t grand enough, 83% of construction waste was recycled, and diverted from landfills.

If nothing else, the Bank of America is concrete proof that high-rises and ecological buildings are not only beneficial for the environment, but also, in the long run, for our pockets. Also, we think it’s quite fitting then that a bank should have been erected using cost-efficient and ecological methods.

The Rotterdam Tower shares many qualities with the other sustainable high-rises mentioned above. It also maximises its use of natural light and includes energy-saving lighting controls. This combination of greener alternatives has earned the helped to award the Rotterdam tower the highest award for sustainability.

The building doesn’t lack in the aesthetics department either. One thing that stands out most about the Rotterdam tower is its avant-garde design resembling several skyscrapers stacked close together, with bridges connecting them into a single, flowing mass.

Pittsburgh is famous for many things: Mr Rogers, Heinz ketchup, and  it’s even the birthplace of the infamous Klondike bar. The latest addition to the trove is this building, known as the high-rise that ‘breathes’. Its unique ventilation system includes windows that automatically open as soon as they sense low temperature or humidity, this innovative system stretches throughout the 33-storey building.

There’s more, this building recycles water caught in rainstorms, and unused water from the building in its flushing system. According to FastCompany, by catching the rainwater ‘the building helps Pittsburgh deal with a common problem during storms: If it rains too much, sewers often overflow into local rivers, polluting natural habitats.’ Anyone whose ever driven in the rain in Malta for not more than five minutes knows that this is a huge problem here. However, it’s one which could be easily solved if local developers implement Pittsburgh’s innovative methods for recycling water.

There’s two key features we believe distinguish this building. First, its unique aesthetic which, with its intertwining white webs covering the entire design, reminds us of straw or hay and could deceive you into thinking it belongs to a forest, not an urban landscape. Second, its use: While all the other buildings on this list all serve as apartments or offices, this one’s a stadium dedicated to showcasing human talent, something which we think more architecture should do.

This green building is impeckable in the way its exterior façade allows for natural ventilation – one of the most important functions of its overall design. Also, the facilities inside the stadium are built as self-contained units which allows the stadium to remain mostly open in order to resemble a nest.  A 24-hour-per-day rainwater collector is located near the stadium; after water is purified, it is used throughout and around the stadium. Pipes placed under the playing surface gather heat in the winter to warm the stadium and coldness in the summer to cool the stadium. Truly, people can’t stop raven about it!

The Pixel building is Australia’s first carbon neutral building and is found in Melbourne.The four story building is home to developer and construction group Grocon who wants Pixel to serve as an example for their other projects.

The Pixel building serves as another example of how a building can be both sustainable and aesthetically pleasing. The building’s design is based on science as well as artistic taste. The intricate assembly of recycled coloured panels allow maximum daylight and shade, while also controlling glare, thus creating a great work environment with the benefit of it all being created with sustainable materials. The different hues also create a unique and individual identity in Melbourne’s metropolis.  The bold colours can seem a bit much to some, but what with the sea of greys and browns that we are used to seeing everyday this building is certainly refreshing.

When casually strolling along the streets of Manhattan, New York, it is impossible to miss this unique geometric high-rise. The Hearst Tower houses many publications and communication companies, including: Cosmopolitan, Esquire, Marie Claire, and Seventeen magazine. Although the company is based around the making and distribution of pop-culture magazines, the building from where these are formed is quite impressive in terms of limiting its carbon footprint.

Firstly, the floor of the atrium is paved with heat conductive limestone, regulating the temperature. Secondly, like many other high-rises, rain water is collected and reused in the building’s plumbing system as well as to nourish plants. Lastly, and most impressively, eighty-five percent of the building’s steel is made up of recycled material. One could say it was ironic that a company who produces magazines which include hot off the press fashion is made up of recycled material. The same people who are noting the fashion of tomorrow are sitting in an office made up from ‘yesterday’s’ materials.

This building is one of the most innovative buildings in this entire list in my book. Just by looking at it, the main attraction of this entire structure is the green wall running up its entire side. Not only is this a lovely break in the monochrome city colourings, however it, like many other artistic elements on this list, serves a purpose. This distinctive feature helps in suppressing the effects of urban heat. This wall acts as a cooling system for the entire building. According to Forbes, research has shown that ‘a layer of green can lower ambient temperature by as much as one to two degrees Celsius’. The green walls also help catch rain fall and provide a home for animals.

Understandably, one would assume that this type of eco-friendly accessory to the building needs much upkeep. However, the wall’s design allows for rain water to cascade naturally and nourish plant-life. Be that as it may, any form of upkeep seems worth it when you take into account the number of positive factors towards the environment as well as the beneficial effects on the city-dwelling employees at Fukuoka.
[/av_textblock]
[/av_one_full]

[av_textblock size=” font_color=” color=” av-medium-font-size=” av-small-font-size=” av-mini-font-size=” av_uid=’av-jybixyju’ custom_class=” admin_preview_bg=”]
Our team at House Malta is always on the look-out for spaces, places, and things that are being built up, torn down, modernised, restored, or re-purposed – be it by a big team or a one-man(or woman)-army.

7 Ways to Create Shelter in your backyard or rooftop

It just takes one good awning, sail-away, pergola, curtain or umbrella to turn your rooftop into a tiny paradise.
Read more

Concrete and steel have taken the construction world by storm since people discovered they could build stable and functional buildings with them....
Read more

To find Villa Frere, make your way to Pieta and walk behind St Luke's Hospital grounds; there, you'll see the entrance to...
Read more

Check this Art deco and Industrial-style stunner in Sliema

Most of the furniture in the house is custom made by David. Facebook marketplace is his favourite source for furniture and décor elements.
Read more