Rebecca’s crowning achievement with the ‘The Long House’ in Żurrieq is her marriage of the postwar traditional front with a distinctly more contemporary interior, where interesting urban gems like the internal skylight, walk on glass, and perforated metal play games with light.

The jury, as quoted from the Architect Awards website, “was particularly impressed with the successful articulation and juxtaposition of different materials as well as the treatment of suspended soffits and the elegant handling of natural light in the interior.”
Rebecca Zammit, who runs Her. Architecture, (very humbly) agreed to walk us through how she transformed her place. The photos in this article were taken by Tonio Lombardi.
.

How did you start this project?

The property itself was a post-war townhouse which had very little architectural value. The whole property could be demolished with the current regulations, yet I set out to keep the front part of the house.

The idea of keeping the entrance gave the property a more distinctive look, and the hallway and old tiles were elements that I believe are important as part of our architectural heritage.

It defines the property from other ‘terraced houses’ as well as introduces the element of surprise and contrast, particularly in the interaction between the older elements and the contemporary living areas.

Did you have to negotiate with the owners about keeping the façade, or were they fully on board?

It’s actually my own house, so luckily I only had to convince my partner! With other clients these days, I find it very easy to convince them to retain elements of the original house since they add character. People are starting to appreciate this. 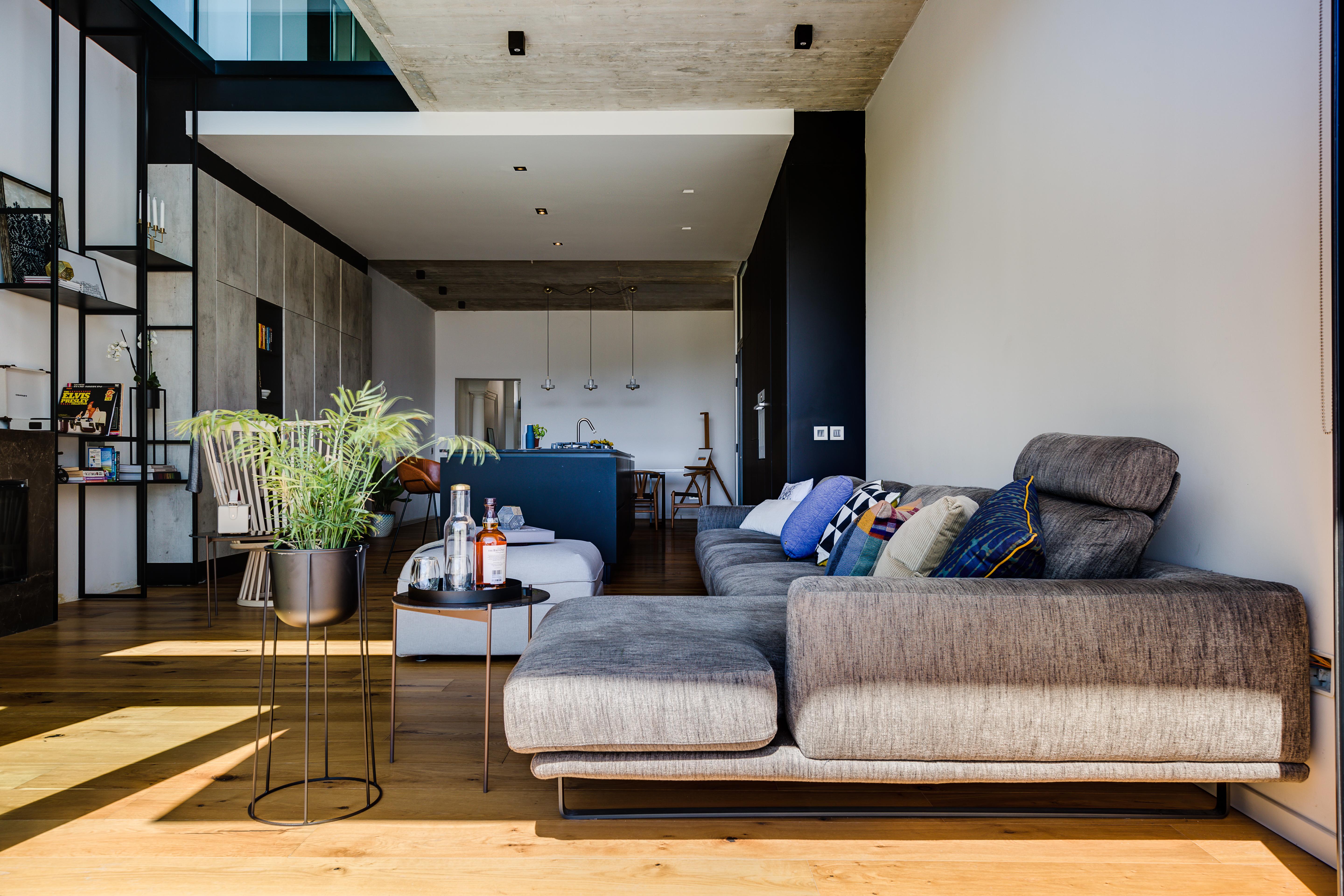 The house has a very traditional front and more contemporary living areas, I’d like to know how this influenced your choice of materials, fabrics, and colours inside.

In terms of materials, I believe the primary element was to create a cosy inviting space where you can kick off your shoes and feel at home, so flooring was super important. I went for engineered wood for all the new areas of the house, while retained the old patterned original tiles in the old part. On the ground floor I also included a raised flooring under the wood floor which helps to reduce rising damp and humidity from the ground below. Everything else followed, the warmth of the wood gave me the possibility to explore cooler colours such as cement grey (exposed concrete ceilings) as well as a black kitchen. Did you mainly work with local suppliers?

Yes, particularly with the dining room table, which was custom made. A marble supplier and metal worker combined trades to produce the table. The light fitting above the table are Tom Dixon and replicate the marble used for the table. Chairs ordered from England. 1949 Wegner Wishbone chair. Again, wood of chair replicates wood of flooring. I find it very important to have matching materials inside the same space.

In what ways did the space restrict your options – and how did you go around them?

Given the restricted space of the plot, I did not want an internal yard on ground floor so the skylight was strategically placed to allow, sun in winter months, while the cantilevers on the back facade block the sun in summer. 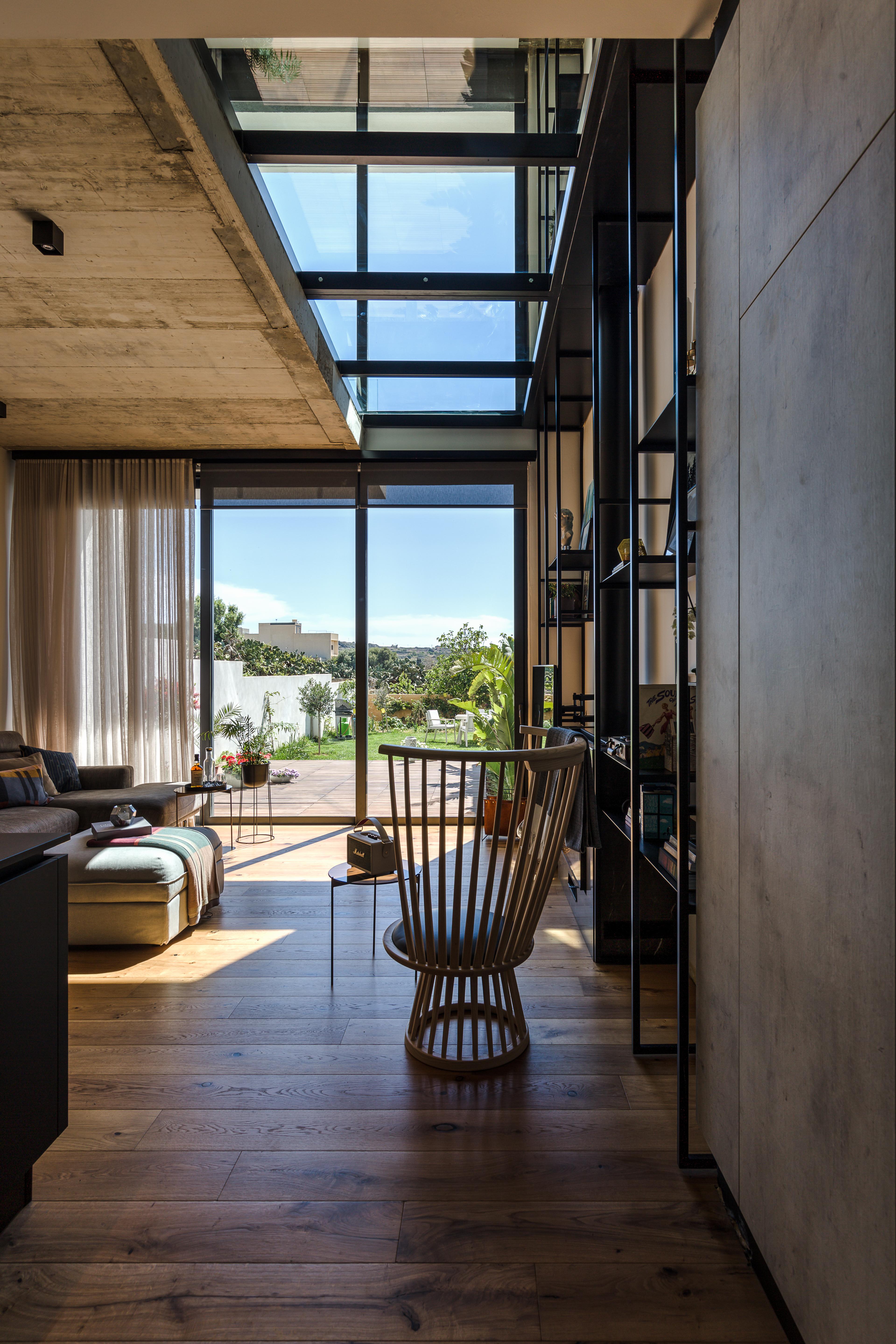 You’re both an architect and an interior designer – how do you approach that?

I believe in many projects architecture is given secondary importance to interior, when in reality they need to be interlinked.

Architecture-based technologies and software help us to analyse the context of the project and the surrounding factors that will in turn effect the internal space, such as the orientation of the building, the sun, neighbouring architecture, weaknesses and strengths of the structure.

These are somehow overseen at design stage which creates the copy paste approach seen around us.

Do you feel Maltese homeowners try to rush the process of designing spaces?

People want good design… in fact the trend to invest in an interior designer is there in Malta. Unfortunately, many times people don’t realise how important the actual shell and context of the building is when it comes to designing the internal spaces.

I think Maltese homeowners really tend to invest a lot in the interiors, and forget about the exteriors. 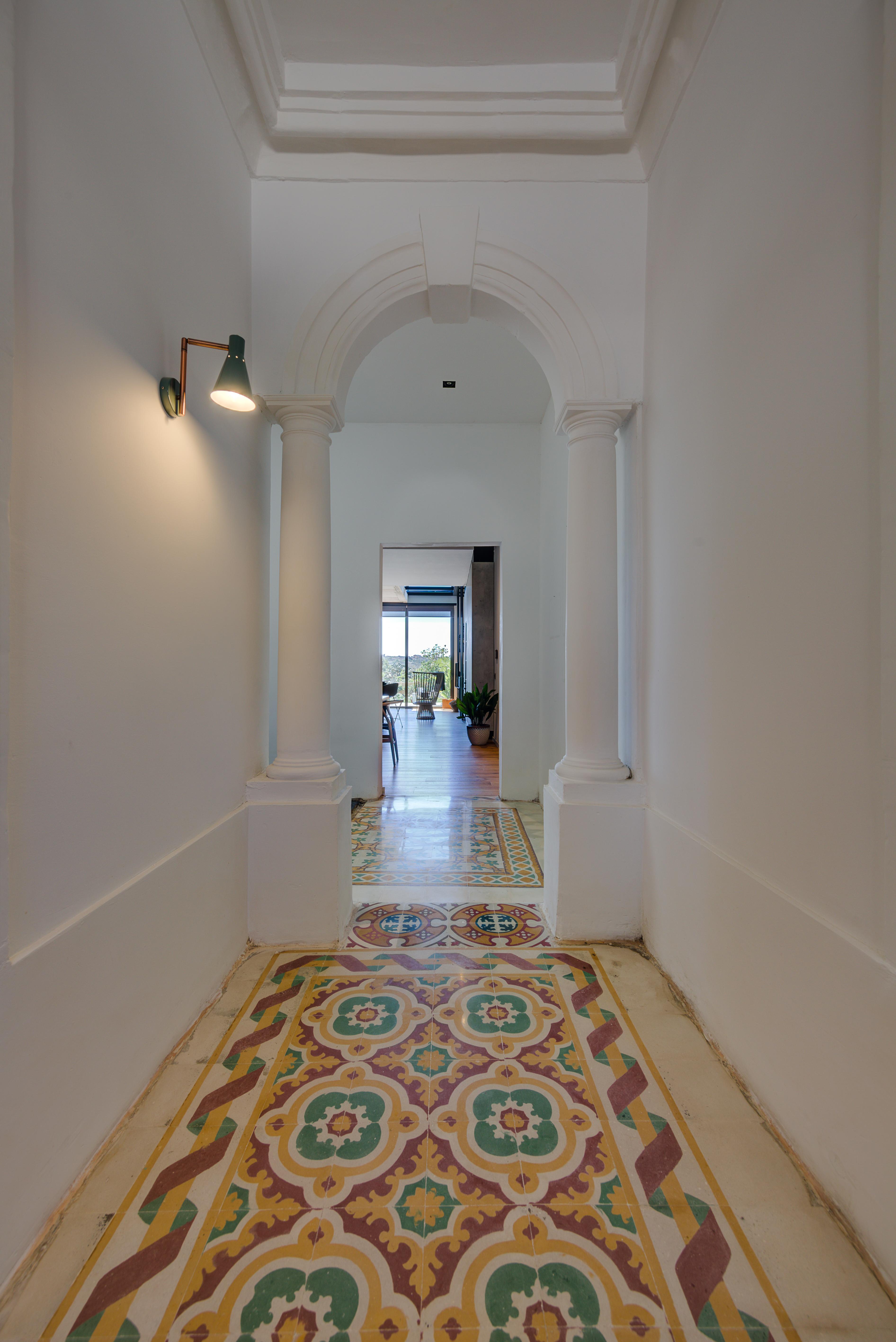 Does this also apply to developers of bigger properties?

Obviously some developers don’t invest in architecture so it leaves the architect with little to no resource to explore good architecture, but I still don’t think that excuses it. I think there is a lack of ‘education’ on the matter. Architecture is much more than a formula for the structure of a building – it’s how you go about planning the space.. the walls, the light etc. Both interior design and architecture study relationships.

It’s a good way to look at it!

Briefly, what would you advise people with regards to buying / working with an old house/exterior?

I believe that an old house is full of surprises.. and this remains true even during construction works.. you remove the paint from a wall and find a hidden arch behind.. for example. I believe that ‘surprises’ are what makes these properties exciting, the interventions and interactions these buildings face through time is what gives them “character”.

I would also advise to look into the history of the place and treat the features as an asset rather than as a deterrent. Beyond this, owners need to be open to the true costs a space requires. Costs that later help with humidity, hidden costs of structural issues etc. It is a huge financial commitment. I think most homeowners/ developers tend to be impatient, so they just want to work with the budget they have, which usually is to minimise costs, maximise profits. 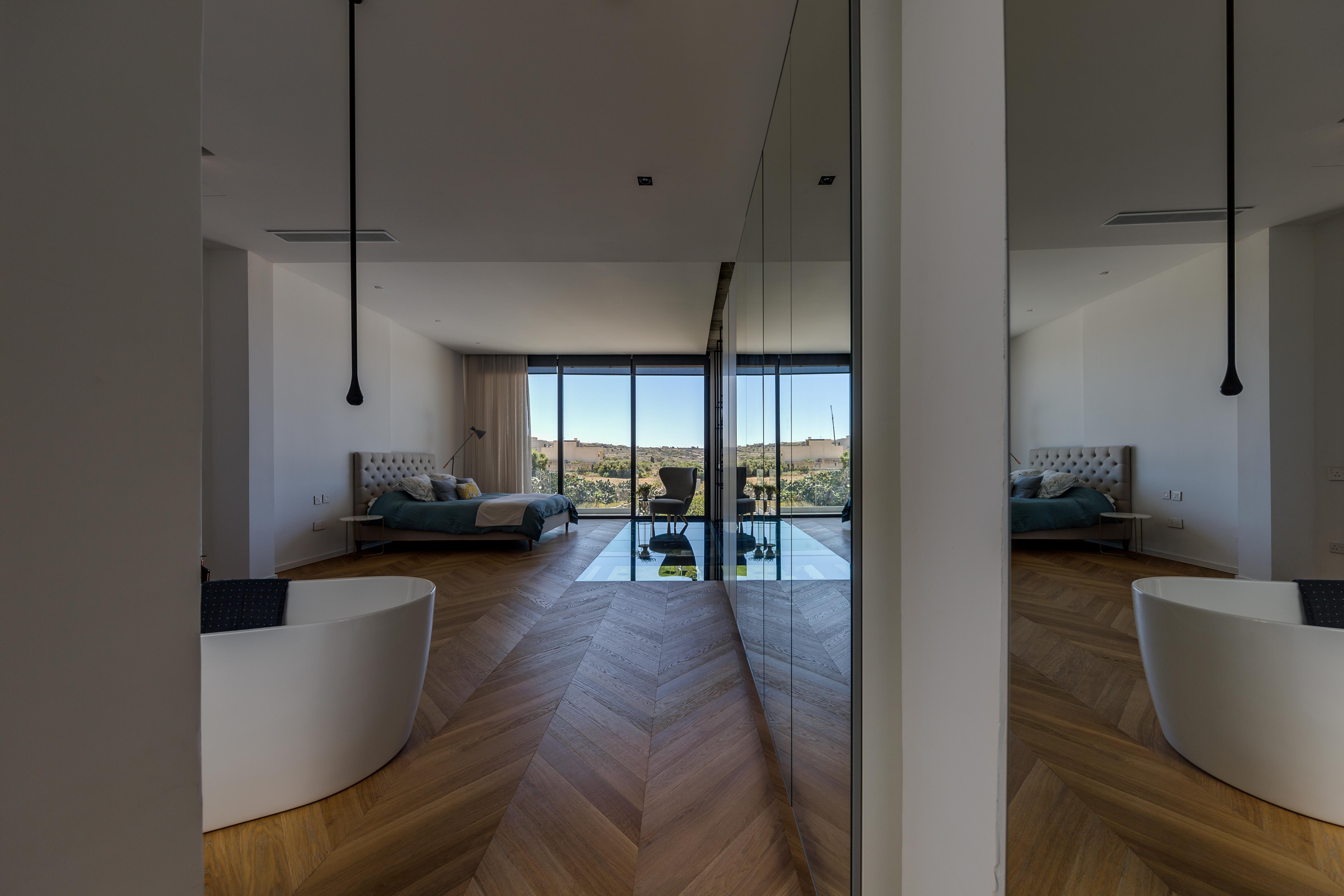 Sometimes waiting a couple more years to be able to cover more costs is a better way to go.

Yes.. cost is always an issue.. Planning Authority are trying to create a more homogeneous streetscape but this is being done through tight guidelines which leave little freedom to design. But the will is there.

Can you elaborate a little on what the PA is attempting to do?

Back in 2015 new Design guidelines were published. So the will is there, but architects still feel that they need to justify when they propose something which is not as ordinary. This thought was also brought up in recent KTP press releases. Speaking of KTP – How does the selection process work for the Premju Galizja? Did you have to apply to be considered?

They issued the first edition of the KTP Premju Galizja and I applied like many others. I was working on my own for a few months and wanted to give it a try. I was humbled to be shortlisted amongst other larger companies as well as architects I personally admire.

Can you take us through some of the distinguishing features and elements of the house?

About the internal skylight..

The internal skylight, while introducing light into the ground floor level, also serves as usable space on first floor. The walk on glass permits the usage of the library on the upper level. The library’s metal shelves were designed to enhance the verticality of the space, guiding the eye to look upward towards the upper floor and giving an illusion of a larger space. 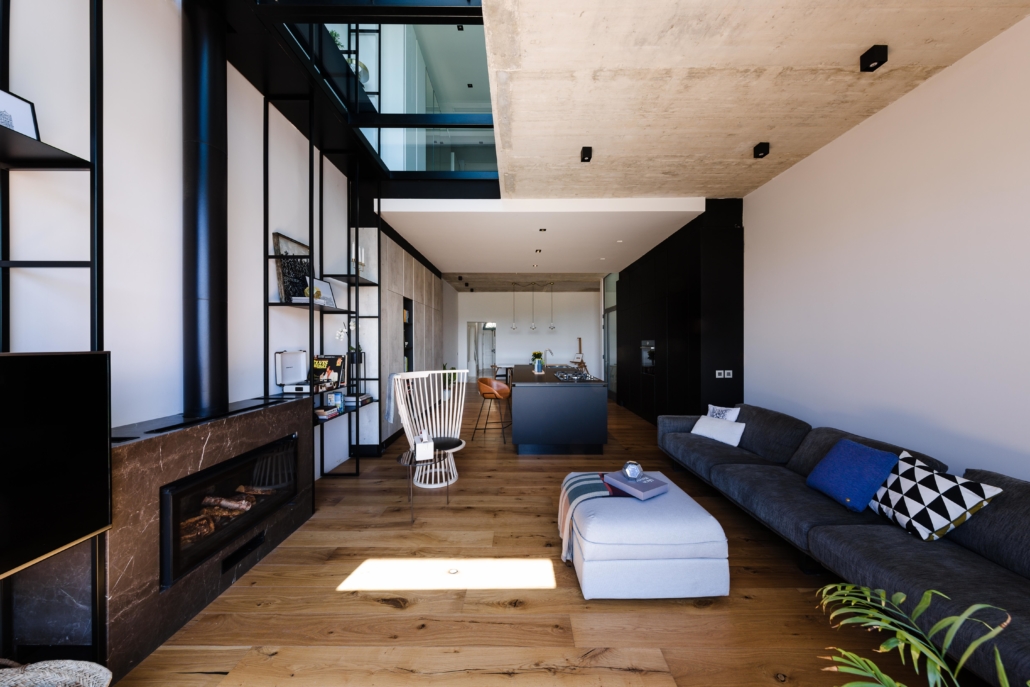 The fireplace was strategically placed in the centre of the room to act as a feature point and warm up the space and contrast the industrial and raw design of the library. The exposed fireplace chimney helps warm up the upper floor as well. 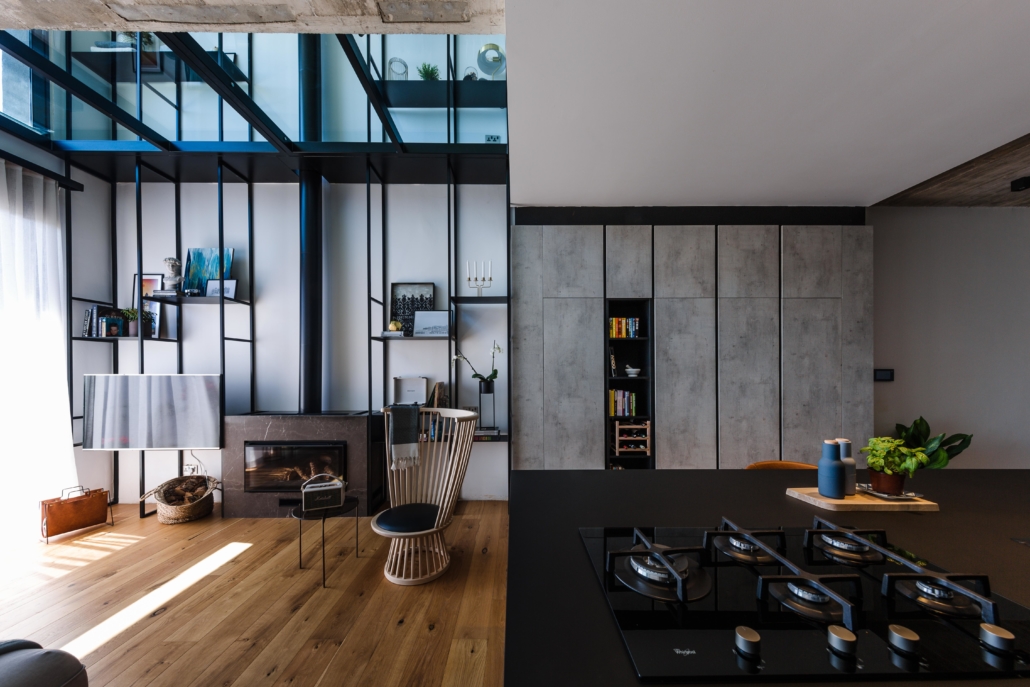 Passive systems of cooling were introduced throughout the house. An internal shaft was built on first floor (the one showing in the main bedroom, next to the bath). This helps to create a current in summer. A skylight and window on the uppermost floor above the staircase help to also create current through the house. These are essential to keep the house cool in the summer months, practically reducing the use of ACs throughout the summer months. 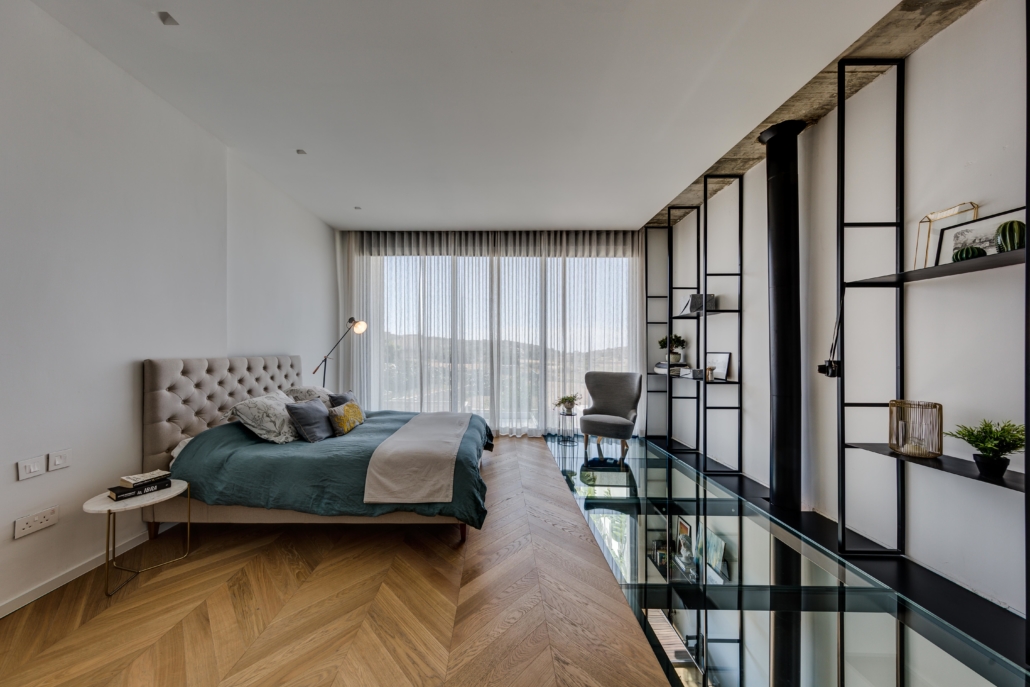 The staircase was designed out of perforated metal since this does not block natural light to the lower levels. Direct sunlight entering through the skylight creates an interesting play of shadows below and thanks to the apertures around the house, lighting in the internal spaces will be changing with each season, keeping the house’s interior connected to the cycles of nature!

“Clever use of natural light and architecture can create something fabulous.” 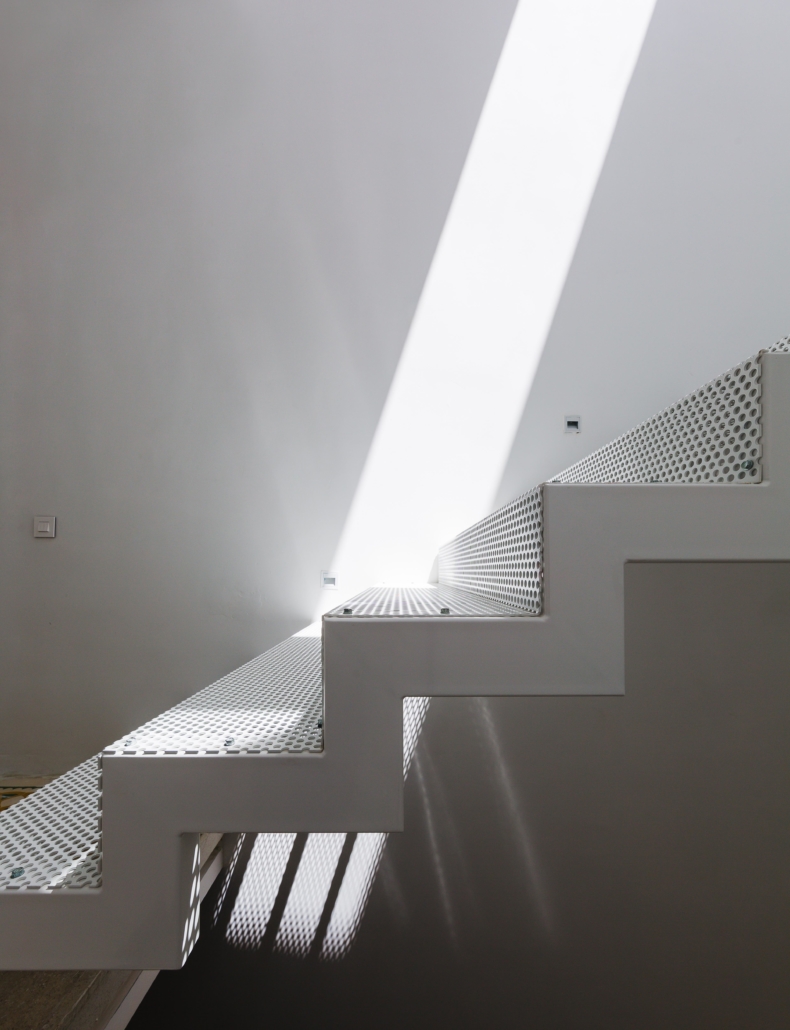 Do you know someone who’s working on a renovation project we should take a look at?