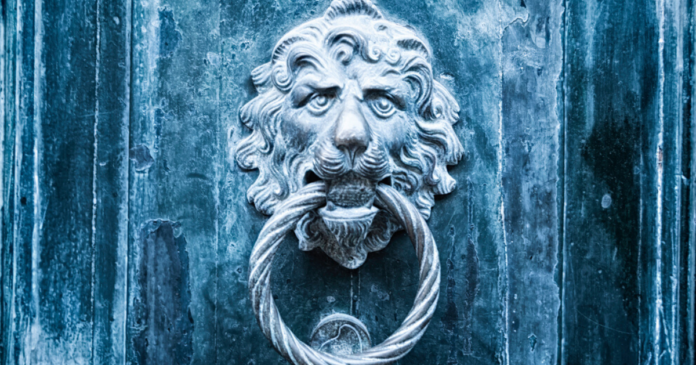 Maltese door knobs are some of the island’s most interesting features. Although we think of them as typically Maltese, many of them were inspired by foreign customs. Culture and identity are notions that are very much intertwined with one another. Malta is a place where cultures merge.

Sitting dead centre in the Mediterranean, it’s no wonder that our archipelago has been influenced somewhat by those around us. A lot of our art, language, and customs can be traced to empires that have at one point settled here: Roman, Ottoman, and British. So, it may not be so impossible to think that our door knockers may also inspired by the same sources.

Malta is home to many stunning door knockers. Check out this article showcasing some of the best door knockers on Instagram!

You would think that pre- the existence of door knockers people simply … knocked. But you’d be surprised. It is believed that before knockers, people used to scratch on the front door using their fingernails. Sounds creepy, but they were different times.

Eventually, the practice of scratching was replaced by knocking, and this was when the doorknobs (or ‘ħabbata’) came into the picture. Homeowners could now also open and close their doors more easily.

When the knocker did eventually come along, it was quite revolutionary for homeowners. The knocker essentially became the feature that stated social rank before visitors even entered the house.

So it was cardinal rule that to show off wealth and status, the knocker had to be big and extravagant since they were a sign of prosperity and power. In fact, most aristocrats and upper-class families had massive baroque style knockers placed on their grandiose palazzos, which implied authority.

A simple iron ring door knocker implied a simple family, while beautifully designed door knockers made of elegant materials meant the house was owned by a wealthy family.

Clean and polished door knobs advertised the level of cleanliness of the house. Their shine would show the visitor that the family was rich enough to afford maids who would constantly clean and polish the house.

Maltese door handles were generally made from ceramic, metal, or brass which is why they’ve held up so well over the years. Many of the door knobs seen on vintage houses are more than 60 or 70 years old at least. That’s very impressive when you think about it.

Each door usually had two of them – one on each side of the main door. This gave it a much more elegant look.

Door knockers came in all shapes and styles. Many take the form of maritime animals, like fish or dolphins which are common Maltese symbols:

Despite not being at all Mediterranean, other animals such as lions, elephants and wolves also feature as knockers. These were quite popular among the wealthy.

Although the king of beasts didn’t exist on our humid island, the lion’s head was largely associated with royalty and strength. It also features on the Royal Coat of Arms of the United Kingdom. Given that Britain colonized Malta, it wouldn’t be far fetched to think that the lion head’s popularity is based on Malta’s colonial past.

Religion is a large part of Maltese history and culture. So it’s no surprise that this has also left its mark on some vintage door fronts. Many handles depict angels, angels holding hands, angels entwined together, and faces of angels.

Other religious figures which feature are Adam and Eve. The devil character has also made his mark on some doors. This is not confirmed but it is believed this may have been adapted from an old Maltese saying ‘Il- ħbieb sal-bieb‘ which roughly translates to ‘Don’t let anyone get too close’. The literal translation would be ‘Friends up till the front door’.

This was a reminder to keep outsiders away from the family home. Culturally, we’re very family oriented, so this does seem sound.

So why did Maltese people make the switch from these gorgeous door knockers to the modern bell we know today?

Perhaps most importantly, mechanical door buzzers and intercoms were much cheaper. They also produced a louder sound. Nevertheless, people continue to maintain and commission classic door knockers in order to conserve and highlight Malta’s unique identity and heritage.

If you want to have one made for your own house, you’re in luck! We wrote an article on the best shops and independent craftsmen who still make classic doorknobs and knockers.

If these doorknobs attest to anything, it is Malta’s immensely eclectic history from the fusion of cultures over the centuries. Throughout the years, Malta has gathered an array of symbolic cultural markers from colonizers and has incorporated them into its own.

Read next: 7 Facts about the Traditional Maltese Balcony worth sharing